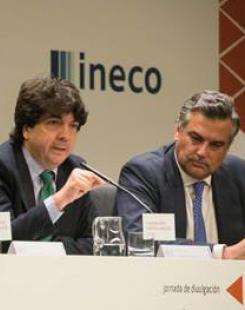 Ineco, has collaborated with Fundación Ramón Areces in the organisation of a dissemination event for the BIM methodology (Building Information Modelling). The event, which took place at the foundation, has gathered the main actors involved in the development of BIM in Spain. Subsecretary of Public Works Mario Garcés was also in attendance.

Jesús Silva, President of Ineco, together with Fundación Ramón Areces’ General Director Raimundo Pérez-Hernández, was in charge of opening the session. In his speech, he highlighted that ‘BIM has meant a change of concept, for we are not only speaking of a representation tool but of a methodology which is capable of introducing improvements in quality, cost reduction and time cuts in design and production’. Furthermore, he added that the adoption of BIM by Spanish engineering, architecture, consultancy and construction companies ‘is necessary and will contribute, even more, to position our companies as benchmarks in this environment’. In recent years, the European Parliament has been boosting the use of this methodology for open design projects and tenders.

Mario Garcés, Subsecretary of Public Works, has been in charge of closing the event and, in during his speech, announced the creation of a workgroup in which the public and private sectors can work jointly with the objective of implementing BIM throughout our country, by means of sharing the criteria and approaches of all the agents involved (companies, institutions, administrations and universities). Furthermore, Mario Garcés has positively valued BIM’s capability to ensure a greater budget efficiency: ‘the better the projects, the less budgetary deviations’.

The dissemination session ‘BIM: Spain’s commitment to intelligent infrastructures’ has become a landmark for the infrastructure sector at a national level, and has defined some of the basis on which should be based the usage of this digital rendering methodology, key in the development of infrastructures.