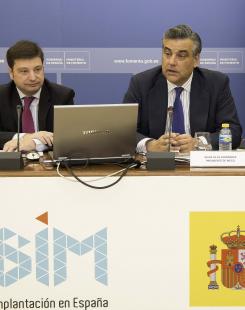 The president of Ineco, Jesús Silva, has participated in the third meeting of the BIM Commission, which was presided over by the subsecretary of Public Works, Mario Garcés. During the day, early developments were presented for the projects being carried out by the different working groups, as was the programme of activities for 2016.

The beginning of the activities of the EU BIM Task Group on 19 January in Brussels was also analysed in the session. The group, co-financed by the European Commission, includes representatives from the public administrations of fourteen Member States: Denmark, Estonia, Finland, France, Germany, Iceland, Ireland, Italy, Sweden, the Netherlands, Norway, Portugal, the United Kingdom and Spain. It aims to bring together and align different national efforts under a common European focus in order to develop a construction sector that is a global point of reference in excellence. Ineco supports the Ministry of Public Works at the Commission, which seeks to drive forward the implantation of BIM methodology in Spain, and in which representatives from both the public and private sectors participate.

The initiative wants to promote the use of this methodology throughout infrastructure life cycles; to raise awareness among public administrations about the establishment of BIM requirements in infrastructure tenders; to establish a timetable for adapting regulations for their generalised use, to develop national standards to facilitate their homogenised use, to create an academic map for training in this methodology in Spain; and to facilitate its introduction into curricula.