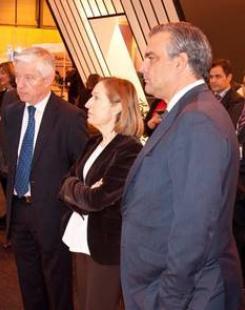 Ineco is once more present at the World ATM Congress; the trade fair’s fourth edition is being held in Madrid from 8–10 March. The event, organised by CANSO in association with ATCA, brings together the main air navigation service providers in the world and in the aviation industry.

Ana Pastor, the Spanish minister of Public Works, accompanied by Jeff Poole, general director of CANSO, was responsible for inaugurating the event. She highlighted “Spain’s strong commitment to the air transport sector and the creation of the Single European Sky.” She later visited the combined Public Works Group stand (Ineco, ENAIRE and SENASA) with Julio Gómez-Pomar, the secretary of state for Infrastructure, Transport and Housing, and Carmen Librero, general secretary for Transport. Ineco’s management team had the opportunity to present some of our company’s key projects in the sector.

At the congress, Ineco is also presenting two technical talks by África de Francisco and Luis Manuel Lozano on flight procedures and smart solutions for CNS systems maintenance and control.

In addition to our participation in restructuring Spanish airspace, our company also has important international projects, such as the design of flight procedures for Oman, the development of Egypt’s air traffic strategy or the new GNSS service centre.