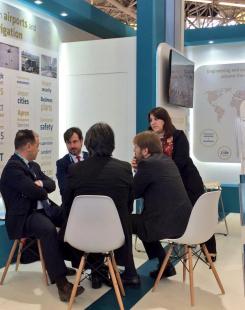 Ineco was present, for another year, at the Passenger Terminal Expo fair, which was held in Amsterdam, from 14 to 16 March. More than 225 exhibiting businesses from 85 countries came together at this reference event for the airports sector, which was attended by over 5,000 professionals.

José Manuel Anguita, Commercial director; Sergio Navarro, business delegate for Europe; Farah Baroudi, from the Commercial Department; and Ana Lago, from the Communication Department were Ineco’s representatives at this meeting, in which we had a corporate stand, where the company’s main services and projects were displayed.

Passenger Terminal Expo, which, this year, celebrated its 20th anniversary, seeks to share the latest trends of the airport industry and boost commercial ties between companies and attending entities.