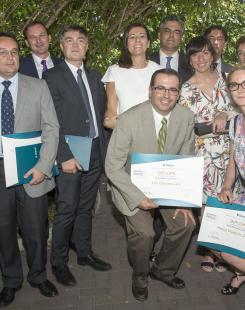 Ineco has celebrated in Madrid’s Casa de America, the 2015 Innova Awards ceremony. The awards seek to recognise talent and effort among Ineco’s professionals, in its search for the most innovating solutions in the field of transport for society.

During the presentation of the Awards, President Jesús Silva highlighted that ‘innovation is the engine that shall drive the value of the company’, and that ‘a company such as Ineco, which has taken part in the main infrastructure projects in the world, is an international benchmark, precisely, thanks to its continuous learning and its innovative spirit’.

This edition has featured three categories. Dámaso Iván Hernández has been recognised with the ‘Most innovative idea’ Award for his project ‘Usage of Google Glasses in transport engineering’, due to his proactivity and initiative in the application of the latest technologies. The award to ‘Best Knowledge Seminar’ went to Pablo Ramos for his lecture on the lessons learned on the Project Management of the high speed HS2 between London and Birmingham in the United Kingdom, for his compromise in the sharing of his knowledge and putting his know-how to good use. Finally, Ignacio Martínez and Gemma Caballero received the ‘Innovation Champion’ Award for their outstanding careers in the development and support to the strategic lines of innovation developed by the company.

This first edition intends to become a starting point for an annual recognition to the innovation, knowledge management and the compromise of all the professionals in Ineco.