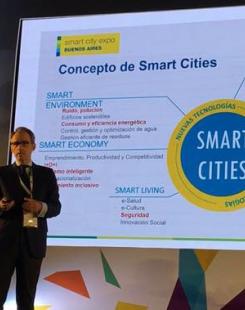 Events
SmartCity
9th of October of 2017

The president of Ineco, Isaac Martín-Barbero was one of the speakers at Smart City Expo, which was held in Buenos Aires (Argentina), between 28 and 30 of September. Leading companies and representatives from cities around the world participated in this event, sharing experience and knowledge necessary for achieving smart cities.

In his speech, centred on the role of the metro in urban development, Martín-Barbero emphasized that "mobility has become a central issue in the growth of cities. Their relationship with sustainability issues and their ability to generate competitiveness and quality of life means that we need to rethink their future". In addition, he noted "the importance of metro networks because they allow a polycentric city to function as the backbone that structures the entire territory".

You can see an excerpt of the speech on Youtube.