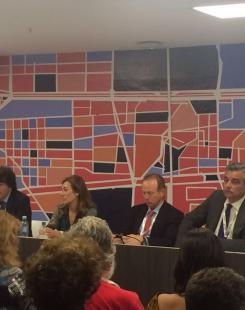 Events
SmartCity
21st of October of 2016

Ineco was present, as part of the Spanish Government’s delegation, at the United Nations Habitat III Conference, which took place in Quito, Ecuador, from 17th to 20th October. The event, which is held every 20 years, brings together the greatest authorities from almost 135 countries to lay the foundations for the urban development agenda.

Among the activities at the event, the President, Jesús Silva, and the Subsecretary of the Spanish Ministry of Public Works, Mario Garcés, participated in a networking activity called “Crises as an opportunity to rethink urban and housing policies”, in which Silva underlined the importance of planning and mobility as pillars of sustainable urban development.The Secretary of State for Finance and Budget, Marta Fernández Currás was also present, along with several leading figures in the Spanish Agency of International Cooperation for Development, the Office for Climate Change and the Ministry of Public Works.

The Spanish Government’s pavilion also played host to a series of presentations on Spain’s capacity for urban development. Experts from Ineco had the opportunity to showcase the company’s valuable experience, both in the Comprehensive Waste Management Plan for Quito 2016-2025 and in the contribution of Transport Planning for Sustainable Urban Development by presenting relevant cases and experiences.

As part of this journey, the Spanish delegation also held institutional meetings with various authorities such as the Ecuadorian Minister of Transport and Public Works, Boris Córdova, and the Quito Metro’s General Manager Mauricio Anderson. Before arriving in Ecuador, Silva also had the opportunity to meet with the Peruvian authorities to discuss business opportunities in the country, including a meeting with the Transport Vice Minister, Fiorella Molinelli.

Ineco has had a long history in both countries thanks to projects of special relevance such as those it is carrying out for the airports of Lima and Chiclayo in Peru. In Ecuador, in addition to the Waste Plan, the company is currently reviewing and regularising the granting of water use and exploitation rights; auditing the expansion of the Pifo-Papallacta highway; and designing the terminal at the port of Manta; as well as having developed the country’s Strategic Mobility Plan.