Ineco highlights its experience at the World ATM Congress 2018 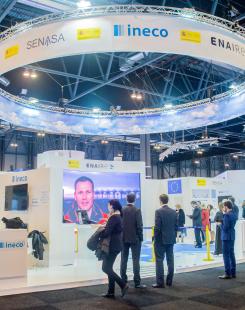 Ineco returned for another year to participate in the World ATM Congress, the major annual meeting of the air navigation industry. The event, which celebrated its sixth edition in Madrid from 6 to 8 March, brought together more than 7,500 professionals from 133 countries, 225 companies from the aeronautical sector and 80 air navigation suppliers.

The Minister of Public Works, Íñigo de la Serna, was in charge of opening the event, together with Olumuyiwa Benard Aliu, President of the Council of the International Civil Aviation Organisation, and Eamonn Brennan, Director General of EUROCONTROL. In his address, the Minister announced the presentation, in the coming weeks, of the Strategic Plan for the development of the civil drone sector, as well as ENAIRE’s Drones Application.

Later, the three representatives visited, together with Julio Gómez-Pomar, Secretary of State for Infrastructure, Transport and Housing, and President of Enaire, and Carmen Librero, Secretary General for Transport, the joint stand of the Public Works Group (Ineco, ENAIRE and SENASA).

During the event, Ineco gave two technical presentations: one by Miguel Capote on the integration of the human factor in security assessment, and the other by Javier Espinosa and Jaime García, who focused on the application of information technology to ATM. In addition, during the SESAR Walking Tours, Víctor Gordo highlighted the importance of the Technological European Research for RPAS in ATM project (TERRA), which Ineco is spearheading.